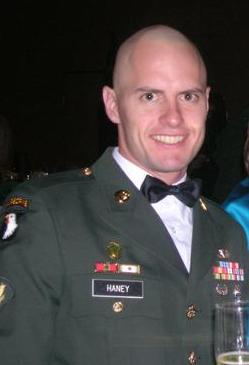 Staff Sgt. Randy M. Haney, 27, of Fountain, Colorado, originally from Orlando, Florida. He moved to Orange County during high school, and it was there in 1999 he met the love of his life, Katie, a classmate and cheerleader at his school. She was so smitten by his charm and good looks that she did a flip. Randy joined the Army in April of 2002 after finding a lack of good paying jobs and hoping the military could provide a sense of stability. He had been inspired by the 9-11 terrorist attacks to make a difference in the world, in what he did to aid in that. He and Katie married in November of 2002 and were first stationed at Fort Richardson, Alaska. He did a tour of duty in Afghanistan from March 2005 until March 2006, then transferred to Fort Carson, Colorado, and was deployed to Iraq from September 2007 until January 2008. He and Katie bought a home in Fountain, Colorado, and started their family. On May 29, 2009, he deployed to Afghanistan, assigned to the 2nd Special Troops Battalion, 2nd Brigade Combat Team, 4th Infantry Division, based at Fort Carson. He died September 6 in Nangarhar, Afghanistan, of wounds suffered when enemy forces attacked his unit using small arms and rocket-propelled grenade fires. Randy was going to retire from the military in 2010 and start his own martial arts studio, he was tired of being gone from his family. He was so sure he would be coming home, he never could say “goodbye” on the phone calls he had with Katie. Randy is survived by his wife, Katie (nee Alexopoulos) Haney; his daughter, Aubry Haney; a son Austin Haney; his mother, Amanda Macey; brother Thomas Haney; a half-brother Andrew Haney; two half-sisters, Holly Atkins and Veronica Haney; maternal grandmother Judith Cox; and several other family members. His father Ronald preceded him in death in 2006.

His uncle, Keith Eugene Haney, was killed by a snipper in Vietnam on April 25, 1971. Randy left the following message on his Uncle’s memorial page on a Vietnam War Memorial website, “I never even met my uncle, But I Have seen his face, only in photographs in his childhood. Today is March 20, 2002. I am 20 years old. I will be flying to Fort Jackson tomorrow, where I will be trained by the United States Army. It brings sad thoughts when I know that I will be trained where my Father and my Uncle were trained. My father was lucky, he was kicked down a flight of stairs by a drill seargent, he broke his right leg in two places and they sent him home. My Uncle was not so lucky sent to serve his country like many others that didnt know their future as I will be sent off to serve my country not knowing my future. My dad always told me to remember a 5 letter word and that this word would be my guide for the rest of my life. *THINK*”

Categories: 2020honorees
Check Us Out On Warrior Talk Radio!