Published by Todd Gregory on February 7, 2017 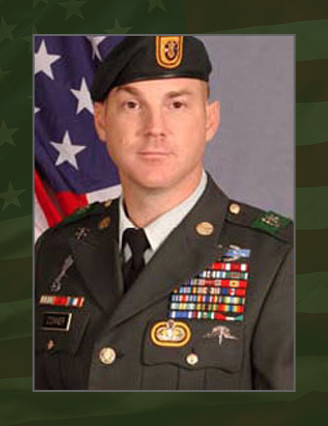 Conner died May 9, 2007 from wounds sustained while conducting a combat patrol outside of Al-Hillah, Iraq.

He deployed in support of Operation Iraqi Freedom in Mar. 2007. This was his fourth deployment to Iraq since 2003.

A native of Tacoma, Wash. and raised in Coeur d’ Alene, Idaho, Conner enlisted in the Army June 24, 1987 as an ammunition specialist. After completing basic training at Fort McClellan, Ala., and advanced individual training at Redstone Arsenal, he was assigned to the 515th Ordinance Company, Redstone Arsenal as his first assignment. In 1992, Conner volunteered for Special Forces training and upon completion of the Special Forces Qualification Course in 1993, he was assigned to 10th SFG (A) as a Special Forces medical sergeant. He filled several positions in 10th SFG (A) to include 2nd Battalion S3 Operations NCO, Team Sergeant and First Sergeant for HHC.

Conner is survived by his wife, Cynthia; his son, Aaron, his daughters, Katherine and Rachel, all of Fort Lewis, Wash. He is also survived by his parents William and Kay Conner of Coeur d’Alene, Idaho, his brothers Brian and Bruce Conner, and his sister Brenda Day.

Check Us Out On Warrior Talk Radio!